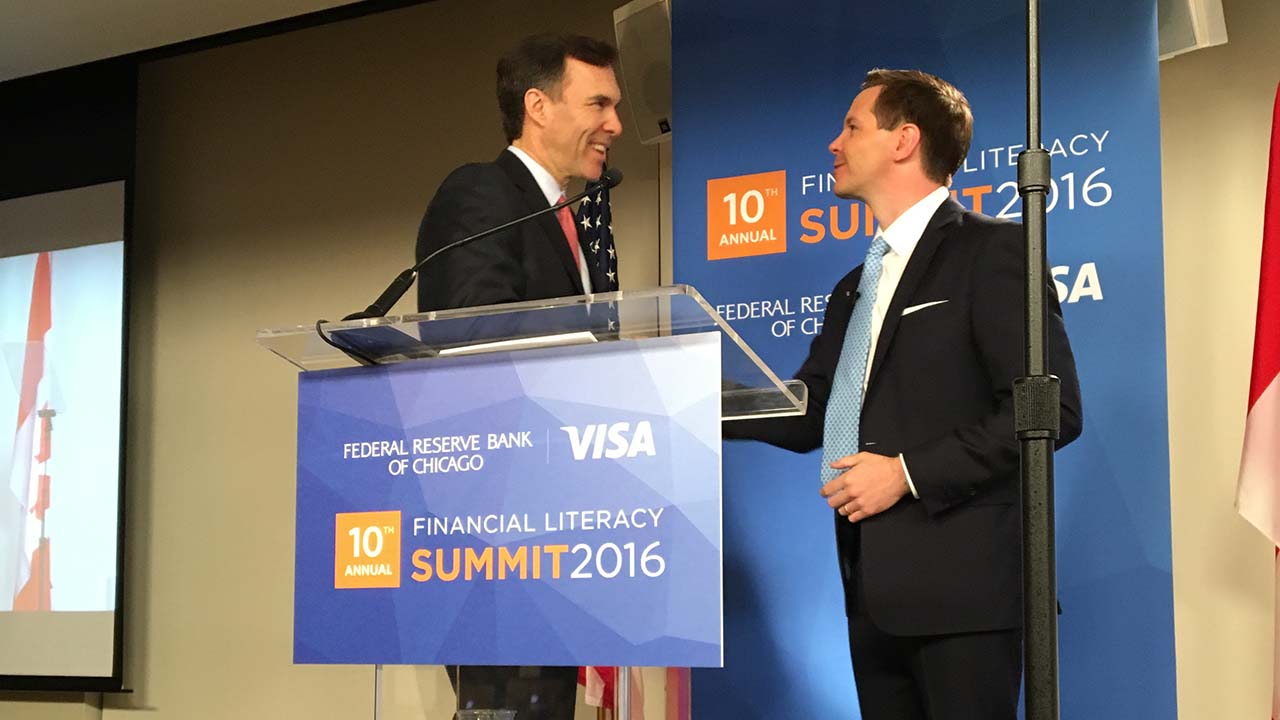 International leaders from major government agencies, non-governmental organizations (NGOs), financial services companies and academia met in Chicago for the 10th annual global summit on financial literacy, marking a decade-long partnership between Visa and The Federal Reserve Bank of Chicago. The 2016 Financial Literacy Summit began with a keynote address by Canadian Minister of Finance, Bill Morneau, who kicked off a discussion about how new technologies can accelerate financial literacy globally.

Stressing the theme of “a rising tide lifts all boats,” Minister Morneau outlined Canada’s efforts to raise the financial welfare of its citizens with programs that support youth and seniors. “We know that having financially literate citizens who are making smart choices will ultimately support a stronger economy in which people are able to plan and save throughout their lives,” he said. “We want to be sure that as technology changes the landscape that no single group is unintentionally left behind in our society.”

Other speakers included Jeff Cruttenden, co-founder of Acorns, a mobile app designed to simplify investing by putting spare change into a diversified portfolio, and Gail Hillebrand, associate director for Consumer Education and Engagement for the Consumer Financial Protection Bureau, who noted that financial education was a lifelong process. “I like to think about learning about money like learning about a language,” she said. “You do best when you start at home, then it can be reinforced and learned in school, and then it has to be practiced over a lifecycle.”

In conjunction with the summit, Visa announced the expansion of its global financial literacy efforts with a second financial literacy comic book. The book introduces children to basic money concepts and is available in 16 languages and in 15 countries. Visa is also launching a new version of its educational video game app for children, Peter Pig's Money Counter. The mobile app will be made available in select countries on Google Play for Android and on iTunes for iOS.

The annual summit is one key component of Visa’s long-standing global financial education program Practical Money Skills for Life. Launched in 1995, the program has reached more than 40 million consumers worldwide with financial education tools and content such as video games, comic books, Community Theater, and hands-on personal finance education. Materials are available in 16 languages across 42 countries.