Benoît Huot: Man with a mission 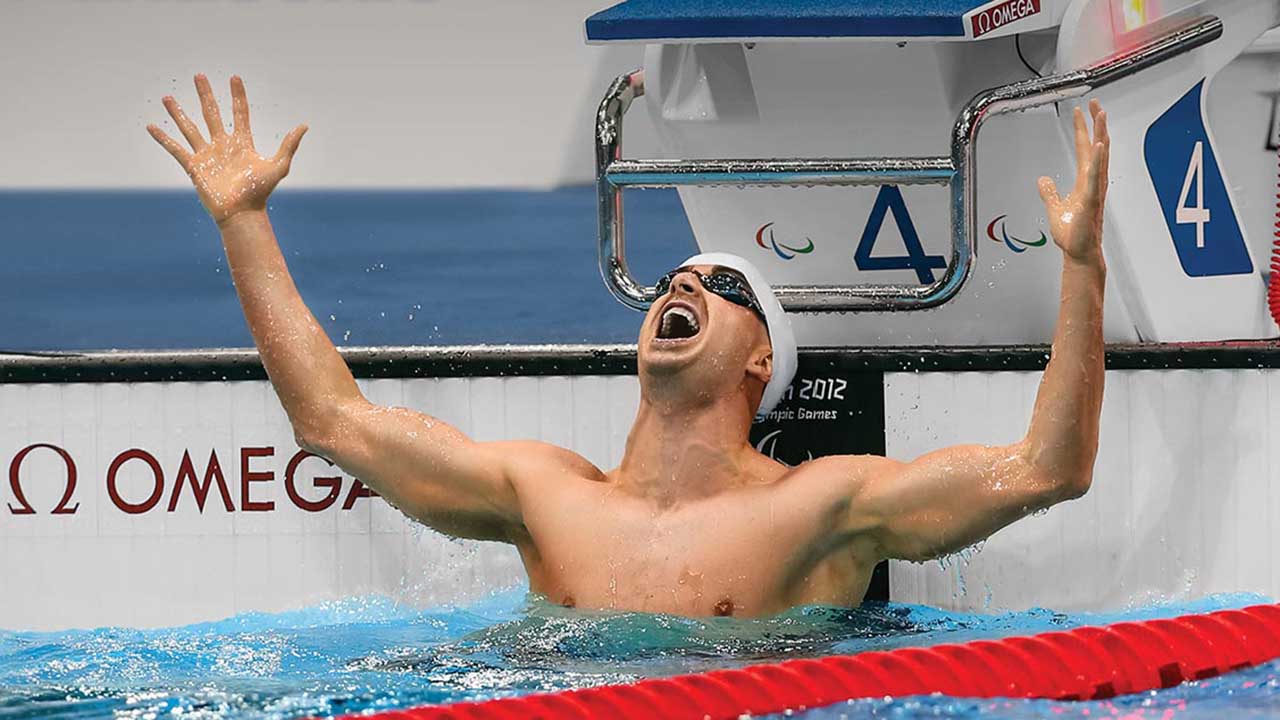 Benoît Huot is one of Canada’s most decorated Paralympians with 19 medals—nine of them gold—from four Paralympic Games. And he’s going back for more in Rio. Born with a club foot, Huot gave up hope of becoming a hockey player (he hails from Longueuil, Quebec, so naturally he’s a Montreal fan) and instead took up swimming,
competing at age 10 against swimmers without disabilities and earning a silver at the 1997 Quebec Games.

At just 14 years old, after qualifying for the Canadian National Team for Swimmers with a Disability, Huot made his international debut, earning two gold medals and four silver medals at the 1998 International Paralympic Committee (IPC) Swimming World Championships in Christchurch, New Zealand. He also earned the nickname “The Shark” by his teammates. Here’s why: At the Sydney 2000 Paralympic Games, he added another three gold medals and three silver medals and at the 2002 World Championships in Mar del Plata, Argentina he picked up another eight medals. To date,
Huot has won 29 medals in four World Championships, setting more than 50 world records in the S10 category.

He shined at the Athens 2004 Paralympic Games, earning five gold medals, one silver medal and setting three world records. As the swimming male athlete with the most medals at the Paralympic Games that year, Huot was named Swimming World Magazine’s World Disabled Swimmer of the Year (he has since earned 14 “Athlete of the Year” awards during his career, among other accolades). Success was sweet but not without its challenges.

In the Beijing 2008 Paralympic Games, Huot was projected to win as the reigning world champion but came home with four bronze medals, which he admits was a low point in his career. “Looking back I realize that I had gotten to a point where I wasn’t enjoying what I was doing…,” he told The Globe and Mail in 2015. “I had to come back to basics and try to have fun the same way I did when I was 10 years old. Being a champion is a whole new set of pressures. Carrying all of those expectations on your shoulders can end up being very destructive because you think about the outcome instead of the process, which is not very useful. The process is the thing that you can change and work at, so that’s where I now put my focus.”

Focus he did. He picked up four medals at the 2010 World Championships and broke his own world record in the 200 individual medley at the 2012 Paralympic Trials in Montreal. During the London 2012 Paralympic Games, he broke another world record to take home gold in the 200m individual medley, won a silver and bronze medal as well and accepted the honor of bearing Team Canada’s flag during the Closing Ceremony. In 2011, he was inducted into the Canadian Disability Hall of Fame.

Huot’s passion for swimming gave him a platform to follow another passion: inspiring young athletes. He is an ambassador for the Right to Play Foundation, having traveled to Rwanda in 2013 to promote sport to children, and has created the Benoît Huot Foundation, which provides financial support to young athletes who hope to compete in the Paralympic Games.

Huot put his degree in communications and marketing (from L'Université du Québec à Montréal) to good use when he served as a Paralympic broadcaster at the Sochi 2014 Paralympic Games. He’ll dive back in the pool in Rio with a few more wins to his name: two silver and bronze medals at the 2015 World Championships and a gold in the 400m freestyle S10 and three silver medals at the Toronto 2015 Parapan American Games, proving to competitors coming to Rio that the Shark still has some bite.